6th Ramsgate Royal Harbour Sea Scout Group welcomed the presence of Lieutenant Ron Gaytano RN for a formal review conducted on behalf of Commodore Core Naval Training and Recruiting on Friday 30th June.  The group is one of the 101 RN Recognised Sea Scout Groups in the UK.

This was a significant achievement for the local Sea Scout Group as it was the first full water inspection of its type, involving the whole group including Beavers, Cubs, Scouts, Leaders and Executive Committee and we’re proud to announce that the event was a glowing success.

Formalities took place at 6th Ramsgate HQ, with 3 Scouts being presented their Chief Scout Gold Award, (the highest award that Scouts can earn) Joshua Mace, Daniel Green and Nathaniel Brown, followed by Lt. Ron Gaytano RN being introduced to every member of the group from age 6 up to adults.

The Inspector was then taken on a tour of Ramsgate Royal Harbour to view a display of Water Activities organised by the Young Leaders and put on by the Beavers, Cubs and Scouts.

Lt Ron Gaytano RN took to the water for a ride on powerboat “Bumbles” piloted by each of the Beavers in turn (closely supervised by Young Leader, Becky Cannon).

“I was so pleased to see 6th Ramsgate enjoying using the harbour facilities and learning such useful skills.” Councillor Trevor Shonk, Mayor of Ramsgate.

A reception was held following the proceedings at Ramsgate Small Boat Owners Association where the inspection result was announced followed by a splendid buffet provided by Sarah Cannon, 6th Ramsgate Executive Committee Treasurer.

“I’ve attended a few reviews, but this is one of the best so far, the commitment of the Leaders and the enthusiasm of the young people is clearly evident.  It is with great pleasure that I announce the groups’ success in this inspection.  I will take back some good memories of tonight and I will be honoured to see you all again in the near future.” Lt Ron Gaytano RN.

“Our young people were exemplary at our RN Inspection and did themselves and the whole group proud. From our 6 year olds to our 17 year old youth members, they were smartly turned out, they engaged with the inspecting officer and most importantly they enjoyed themselves, especially on the water.  It is fantastic to see so many young people engaged in something they enjoy, learning new skills, taking part in physical activities, working together and earning national body qualifications. They are proud of what they do and that shone through on Friday night.”  Adam Kirby-Brown, Scout Leader.

“Everyone had an amazing time and what a great pride that Lt. Ron Gaytano RN wants to be more involved with our group moving forward.  This just goes to show what a great job the leaders do, not only at inspections but all year through.” Shirley Appleby, Group Scout Leader.

Photographs were taken by Mr Steve Burton, who captured some great momentums of the formal proceedings and the water activities.

“The proceedings went like clockwork and it was lovely seeing the three lads – who suddenly grew into young men- getting their Chief Scout Gold Awards.  Sir spoke to each member right from the smallest beaver -he took time and gave each his full attention and he obviously enjoyed himself.  The leaders were amazing and looked so professional on the water and the behaviour of the young people was impressive.”  Lesley Gallagher, Executive Committee Chair Person.

Under a new leadership team and dedicated Executive Committee who have great plans for the group over the coming months, we look forward to the exciting future of sea scouting in Ramsgate.

6th Ramsgate Sea Scout group is currently increasing numbers for all sections and is happy to hear from Beavers, Cubs and Scouts looking to join in their adventure.

We also welcome enquiries from Adult Volunteers with an hour or two to spare, on a regular or occasional basis, who would like to help shape the future of our young people in Ramsgate.

Photos below.  All Photo credits to Steve Burton.

Media enquiries may be directed to media@6thramsgateseascouts.org.uk

You can find out more about which cookies we are using or switch them off in settings. 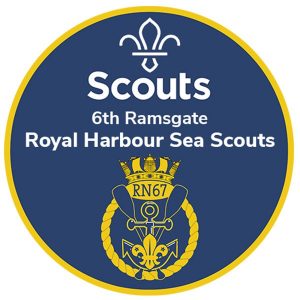 This website uses cookies so that we can provide you with the best user experience possible. Cookie information is stored in your browser and performs functions such as recognising you when you return to our website and helping our team to understand which sections of the website you find most interesting and useful.  Our full privacy policy can be viewed here (opens in a new tab).

Strictly Necessary Cookie should be enabled at all times so that we can save your preferences for cookie settings.

If you disable this cookie, we will not be able to save your preferences. This means that every time you visit this website you will need to enable or disable cookies again.